Life can be messy and sometimes ugly – but with the right person life is beautiful and amazing. We didn’t get to our lives together in the “traditional” way. We met thru running and it’s why it’s such a big part of our lives.

But let’s get to the messy parts first – We were both married to other people when we met each other. Our previous lives had us in partnerships that weren’t really that. We did countless things alone, and learned to accept it. Don’t get us wrong, marriage is a beautiful thing. Our marriages were happy in the beginning, but just as a tree grows from a single stem into several branches that move away from each other, so did our married relationships. Pictures and smiles and social media say one story, but as the saying goes, don’t judge a book by it’s cover.

We recently heard about a study on really happy people – and the overwhelming majority of them could trace their contentment back to the quality of their relationships with other people in their lives. It wasn’t money, or possessions, or anything else…it’s relationships that make people happy.

That all said, we both got divorces. Divorce is an awful process. But it’s not necessarily a bad thing. On the contrary, it can lead to all parties involved being happier than they’ve been.

Lettuce get to some running now…We ran alone. Sure, we often ran with groups, but the majority of mornings we were hitting the lonely streets solo. Running lets you see and experience amazing things that most people never see. Oh how we longed to share all those amazing things with someone.

Even surrounded by thousands of people in races, we still felt alone. Most races we only had strangers to cheer for us or run next to us. 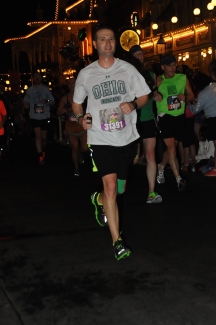 See those two sets of pics up there? They were taken the same year. But we could’ve chosen pretty much any race from any year. Whether one mile or 26.2 miles, it is a long way to suffer all alone.

But then a curious thing happened. The both of us registered to run the Chicago Marathon on behalf of charities. Curiouser was that we only lived about 3 miles apart. Curiousest was that we both run pretty much the same pace. Boom, we each now had a training partner. And that’s where our story begins.

We had known of each other for years from being part of different running groups, but when we started training for Chicago, that’s when we really got to know each other. We ran hundreds and hundreds of miles together. We told each other about our other lives. How lonely we were. How our smiles were a facade. We grew close through these miles. 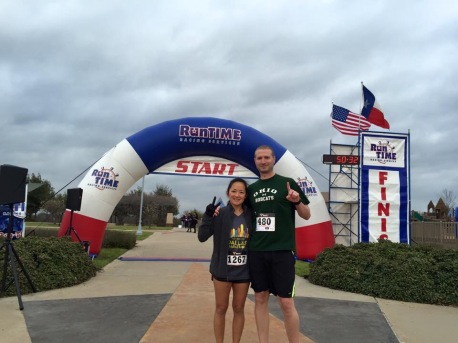 ***The above pics are from one of our first races together. First place overall for S and first female for M!!! OK, so even if this  particular 5k course was a mile short, who cares, it was the same distance for everyone. And now our finishing times are on the internets forever muahahahaha!***

Anyway, the Chicago training went on. 650 miles together. Some easy, some tough. And some were even brutal…during a 20 mile run, S gave in. We were lost. S sat on the curb, defeated. He started to hold back tears and kept saying to M that S wasn’t made for marathons.  Or the the time M had to stop running during our 17 miler from a blister and sat near the bathrooms at White Rock Lake while S, exhausted, had to run back 7 miles to the car so he could come back and get M. M was shivering and blue from dehydration on a humid summer day. And it’s in these moments of defeat where we found strength in each other.

For every “bad” run, there were 50 “good” ones. We saw sunrises, wildlife, meteor showers, quiet streets, pre-busy parks, etc. etc. etc. Finally, someone to share these experiences with! Once we longed for someone to share our early morning miles with, and now that we had that person, it was even better than we hoped for.

And by the way, all the training together paid off. We both had 20+ minute PRs in Chi-town!

And by the time of Chicago, we realized how much we had in common (running, yoga, dancing, karaoke, candles, tequila, etc)…and that we needed each other. We knew we made each other happy.

Fast forward to 2017 and we are together. It took a while to get where we are now. We’ve lost friendships and family members along the way, but we’ve also gained wonderful and supportive friends and family to help us through. With their strength and the love of our 4 kids- J, M, G and G – our lives are full of blended happiness and adventures.

We run together every morning, and yes, even in races.

Rest assured, you can trust our smiles on our social media now.

What about you? Do you have someone you can run with? Answer in the comments!

PS. We’re just getting this blog up and running, but it will be more and more regularly posted in as we get it all settled. Please come back soon!

We’ve run this race the past couple years, and in this post we’ll give you our best tips for a good race and a good time. If you don’t know, this race is a 5k put on by the Dallas Mavericks of the NBA. It starts/ends right outside the arena. It draws some speedy folks. It also features a fun post-race party. Know you know.

Firsty off doe, lettuce say that we shant be running it this year ’round. Not cause we don’t like this event, but it just wasn’t happening this year. In years past, this race was in October, but this year they bumped it up to the first week of September. That’s a tough time for those of us with kids who just started the new school year. So we’ve got obligations – yeah, we’re adulting big time.

But for those of you going, here’s our tippity tips:

1.) GET THERE EARLY. It’s a (school) night race. That means you will be battling Dallas rush hour traffic to get there. That traffic blows. Our belief is that traffic is our living version of Hades. Leave early so you won’t be as stressed about making it to the race on time, while you sit in bumper to bumper Hades.

2.) PARK IN THE GARAGE. On game nights, this garage costs skrilla to park in. On race day, this garage don’t cost no skrilla. Park there and save the dolla dolla bills for making it precipitate later on (if you so choose).

3.) *TINKLE INDOORS. One yuuuuge perk of this race is they open up the arena so you can use the facilities pre & post race. Take advantage of that…Unless, of course, you prefer port-a-potties, then we’re sure you can find one around. There’s always construction going on in North Texas, and that means port-a-potties-a-plenty.

4.) GET READY FOR CRAMPED CONDITIONS. The race start is on a narrow street. You’ll be packed in the crowd like Swedish sardines. If you’re a faster runner, work your way to the start of the (only) corral. If you’re not a faster runner, get in your proper place (further back) as to not cause accidents/annoyances.

5.) **DON’T GO OUT TOO FAST. Once you pass the arena, you go down a nice little downhill. It’s the beginning of the race, so people are already jacked, don’t buy into their hype. They’ll be sprinting down that hill – resist the urge. Save that energy for later in the race.

7. EMBRACE LONELINESS. There’s like one Mavs Cheer Station, the rest of the time it’s pretty lonely out there. Not much crowd support to speak of.

8.) **GIT UP DAT HEEL. You did save energy instead of sprinting down the hill at the beginning of the race, didn’t you? Didn’t you??? We hope so, cause you’ll need it to get back up the hill and finish strong.

9.) GIT YER DRANK ON. After the race, it’s party time…*Or potty time, if you need to go again. They usually have free adult brews and some live music. Find your friends (or make new ones) and get turnt (if you so choose).

If you’ve followed all of our tips, you’ll probably place in your age group and earn a medal. We were both lucky enough to do this last year.

And remember the other big perks of running this race: it benefits a great charity (Mavs Foundation) and you get A FREE TICKET VOUCHER TO A MAVS GAME!!!! You’ve gotta take advantage of dat!

So there you have it, kids. We hope our tips/pics inspire you to get out there and have a great time! Please let us know what you think in the comments!

Have you run this race before? Do you have any tips we missed? If not in Dallas, have you run any sports themed races in your town?

We’re just getting our site set up. But keep coming back to have your mind blown!